A few days ago, the news that “Zhong Nanshan’s team found that compound Banlangen is effective against the new coronavirus through in vitro research” attracted attention on the Internet, and also caused consumers to snap up Banlangen, and even the stock price of the listed company Baiyunshan (600332.SH) also skyrocketed.

In response, Zhong Nanshan responded on October 23, saying that someone took out of context and “expanded” what he said.

In addition, Gao Li, a spokesperson for the China Securities Regulatory Commission, said on the 23rd that he would continue to pay attention to the sharp rise in Baiyunshan’s stock price.

According to a report by China Business News on October 23, Zhong Nanshan told reporters: “I said a few days ago in the Guangdong-Hong Kong-Macao Greater Bay Area cooperation agreement (forum), compound isatidis, not isatis root in the laboratory. The anti-new crown virus effect is far from effective in the body. Baiyunshan Pharmaceutical Factory, as an ‘expert’, should know very well, but (among them) someone took my sentence out of context and expanded my sentence, even saying that it is isatis root, which is a distortion, Relevant departments have come out to clarify.”

On October 13th, a seminar on the transformation of Baiyunshan Banlangen to Macau and a cooperation signing ceremony were held in Guangzhou. Since then, a video titled “Zhong Nanshan: Baiyunshan Compound Banlangen is effective against the new coronavirus and will not talk nonsense” went viral on the Internet, causing a big stir. The outside world once questioned the authenticity of the video, and the effectiveness of Banlangen Granules was suspected to be exaggerated.

On October 15, Guangzhou Daily reported that the fourth council meeting of the “Guangdong-Macao Joint Research Center for New Drugs for Respiratory Pathogens” held the Baiyunshan Banlangen Macao Transformation Seminar and Cooperation Signing Ceremony in Guangzhou. It was revealed at the meeting that the joint research team systematically carried out a series of in vitro efficacy screening of southern medicines against the new coronavirus, and found that compound Banlangen granules and Kouyanqing granules showed in vitro inhibitory efficacy. 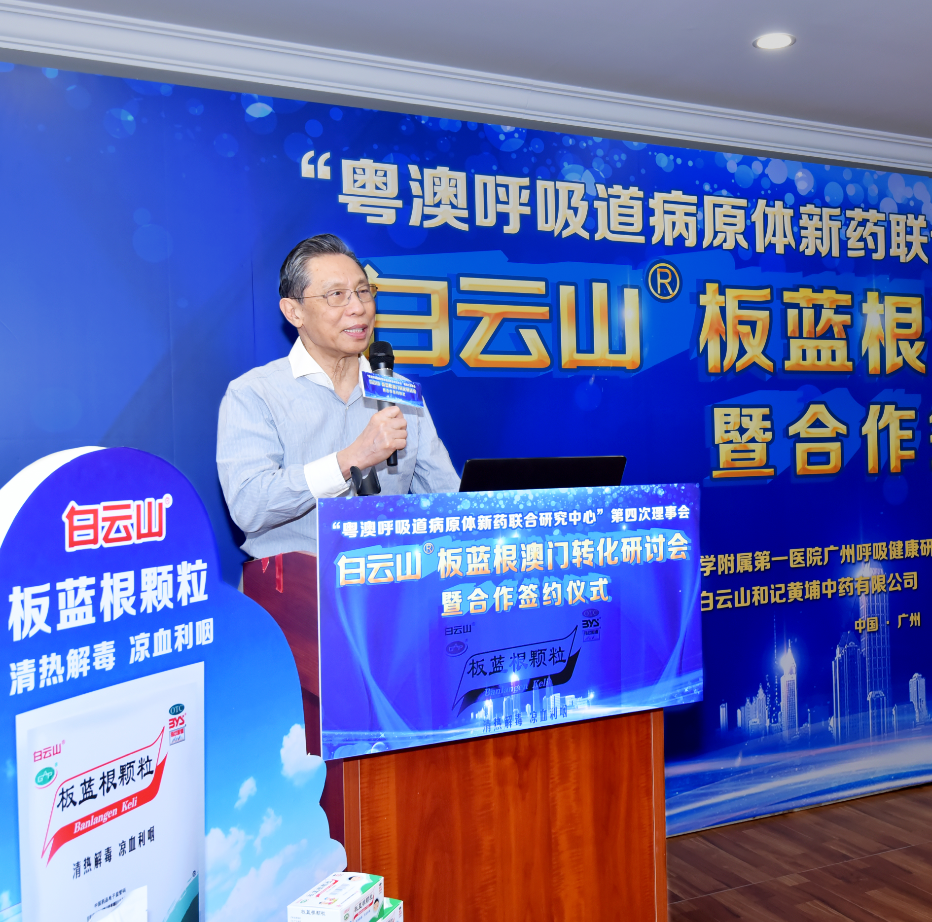 Baiyunshan’s stock price soared, and its market value soared by 5 billion a day

Affected by the fermentation of online news, Baiyunshan’s Banlangen products have quickly become hot-selling products, and there have been panic buying waves in many places, and even some online stores have sold out of stock.

On October 16, Baiyunshan’s A-share daily limit, H-shares soared by 15%, and the total market value soared by about 5 billion yuan. In addition, Xiangxue Pharmaceutical, which produces Banlangen granules, also rose by the daily limit. In addition, many related stocks rose sharply.

Baiyunshan issued a clarification announcement on the 18th, stating that the relevant conclusions involved in the relevant media reports are only the results of the anti-new coronavirus in vitro screening experiments conducted by the company’s joint venture Baiyunshan Hehuang Company Compound Banlangen Granules, and further development of this product is required in the future There are still some uncertainties in the related work. The sales of Fufang Banlangen Granules are not expected to have a material impact on the company’s operating results. 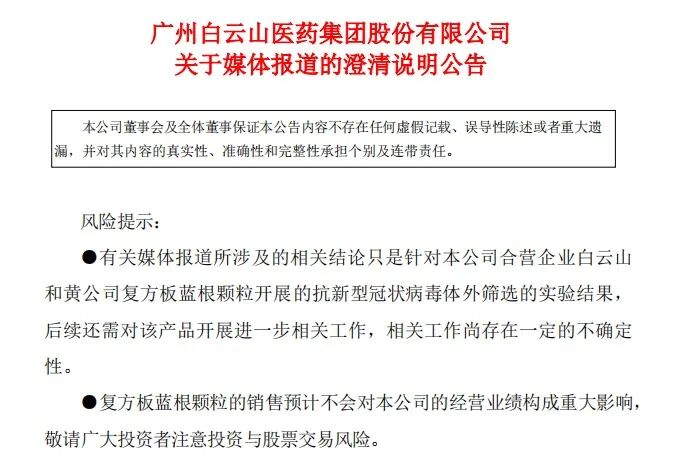 The China Securities Regulatory Commission responded: Once a violation of the law is found, it will be investigated and punished according to law

Gao Li said that the China Securities Regulatory Commission has paid attention to some media reports on the in vitro research conclusions of Baiyunshan Compound Banlangen Granules. The company has issued a clarification announcement on October 19 and made a risk warning. According to the announcement, the relevant conclusions covered by the relevant media reports are only the results of the in vitro screening of the compound Banlangen granules against the new coronavirus conducted by the joint venture Baiyunshan Hehuang Company (a joint venture that holds 50% of the shares and is not included in the scope of consolidation). Further work on this product needs to be carried out, and there are still certain uncertainties in the related work.

The China Securities Regulatory Commission will continue to pay attention to the relevant situation, and will investigate and punish any violations of laws and regulations in accordance with the law.