After a lapse of one year, Green Tea Catering finally obtained the listing pass, and will become the first lucky person to log in to the capital market in the 2022 catering IPO boom. This also means that the 100 billion private equity group that “sneaked in” four years ago can finally escape from this “existing chain Internet celebrity”?

green teaan Internet celebrity chain more than ten years ago, now wants to use the tail end of the catering listing to expand financing in Hong Kong stocks, but the market may not be able to buy it.

On March 8, 2022, Green Tea Catering announced that it has passed the hearing of the Hong Kong Stock Exchange and is expected to be listed within this month. It is said that the company will start a pre-road show within the week,It plans to raise US$150 million (approximately RMB 950 million), which has shrunk from the previously reported fundraising amount – only 75% of the target at the time.

Since its first listing last year, green tea’s profit prospects have been questioned by the market. However, with the support of the “gold masters” behind it, it has still successfully passed the conference, and it is bold that it will ignore the cost and debt pressure and achieve double expansion within two years. , intends to recreate a “green tea”.

The green tea standing on the stage of the Hong Kong Stock Exchange still tells the old story of chain expansion. Time has changed, will the “chain restaurant”, the yellow flower of yesterday in the eyes of capital, still attract the market to buy it?

On March 29 last year, Green Tea Catering submitted a prospectus for the Hong Kong stock market for the first time. It initially planned to raise about 200 million US dollars (about 1.26 billion yuan), but it was delayed and expired on September 29 of that year.

At that time, many voices in the industry speculated that Green Tea Catering might suspend its IPO. On October 5 last year, a week after the first prospectus expired, the company updated the prospectus and launched a second IPO, eliminating market doubts. After nearly a year, green tea finally realized its dream of Hong Kong stocks.

Regarding the use of the $150 million IPO fundraising, the prospectus shows that in addition to repaying short-term bank loans, building central food processing facilities, upgrading information technology systems and related infrastructure, etc., there are more important “expanding the company’s restaurant network”. “. 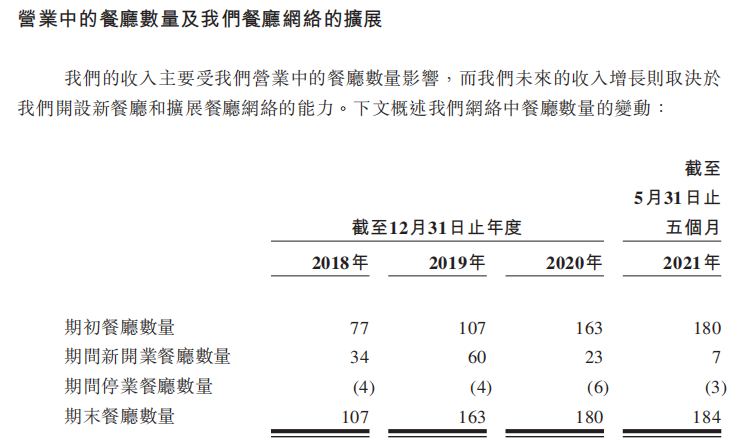 In this regard, Tan Haojun, an adjunct professor at Zhongnan University of Economics and Law, pointed out the risks behind it: Excessive expansion will reduce benefits, and at the same time, the chain of risk management will become larger and larger, and the probability of problems will also increase.“Companies that rely solely on store expansion to form an advantage tend to have more and more debts.”

Regarding how to deal with the increasing liabilities, Green Tea Group stated that it will continue to improve the net current liabilities position by conducting centralized procurement through the direct procurement center to control costs. Moreover, the directors of the company believe that the operating funds are sufficient to meet the needs and will not be materially adversely affected by the net current liabilities for the time being.

From the perspective of business performance, although the green tea restaurant has come out of the shadow of the epidemic and achieved a turnaround, its hematopoietic ability is not strong.

In the first nine months of 2021, the green tea restaurant’s revenue was 1.694 billion yuan, a year-on-year increase of 58.2%, with a compound annual growth rate of 9.39%, net profit was 95 million yuan, and the adjusted net profit margin was 6.9%. Overall, the profit is meager and lacks bright spots.

“Out of breath”hard to hide

In 2008, the first green tea restaurant opened in Hangzhou, continuing the characteristics of its predecessor, Green Tea Youth Hostel. 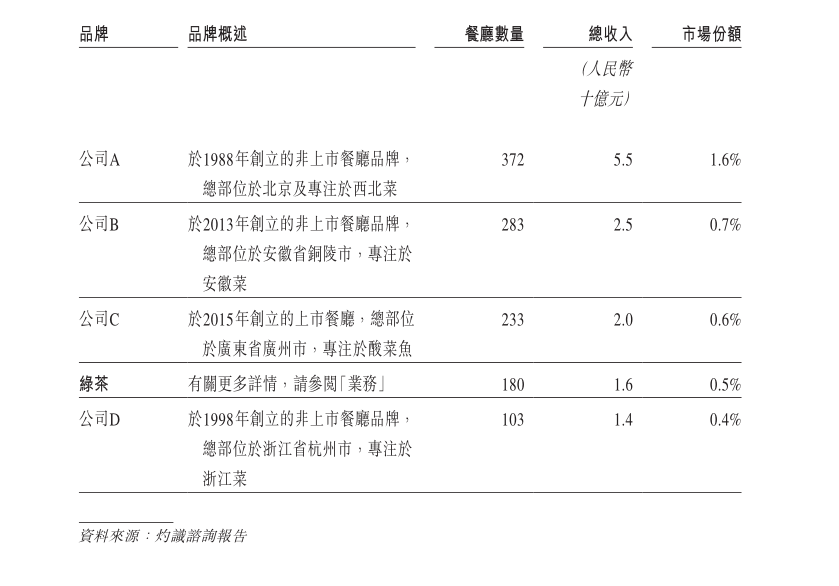 “Cost-effectiveness is a double-edged sword.”The market analysis point of view points out: at the price of 60 or 70 yuan, you can eat cost-effective dishes with standard service in many cities across the country, which is the greatest competitiveness of green tea. However, the dishes are too ‘integrated’, lack the core taste and soul, and have no memory for consumers, which is a shortcoming of green tea and a resistance to future expansion.

As a former “Internet celebrity restaurant”, Green Tea Restaurant had an average turnover rate of 6 to 8 times during the peak period from 2013 to 2014, and even more than 12 times in core stores. However, according to the prospectus, from 2018 to the third quarter of 2021, green tea was 3.48 times, 3.34 times, 2.62 times, and 3.32 times, respectively, and did not return to the pre-epidemic level.

After the aura of internet celebrity faded, green tea seems to have lost the advantage of “high turnover rate”, and its price is not as good as Haidilao, Taier Pickled Cabbage Fish (Jiumaojiu), etc., so the profit prospects are not optimistic.

In this regard, Wang Qinsong, the founder of green tea, also said in an interview in the early years: On average, the turnover rate of 4 times a day is the breakeven, and the highest is 7 times. “Although it is necessary to increase the turnover, the turnover rate cannot be blindly pursued, because the state of the chefs, staff and physical strength will be overwhelmed, which will directly lead to a decline in service quality and thus affect the customer experience.”

Green tea’s efforts to improve profitability include not only expanding stores, but also raising prices. According to reports, this “delicious and inexpensive, 60 yuan per capita” cheap restaurant, the highest per capita in the Hangzhou store has reached 99 yuan, and the price of the restaurant’s must-eat list for two is 205 yuan. In addition, the per capita consumption of green tea restaurants in many cities has also risen to the range of 70 to 90 yuan.

However, this strategy also seems to be contrary to the short-term pressure on consumption will in the post-epidemic era. In the first five months of 2021, per capita consumption is even lower than the full-year level of 2020.It shows that even if offline traffic picks up, it will take time for the unit price of customers to return, and the green tea restaurant “increases prices” at this time, which may be difficult for the market to digest.

“The current green tea restaurants seem to have encountered some development bottlenecks, and they do not have particularly prominent advantages in terms of the number of restaurants, profit margins, and brand volume. If the cost performance is lost again, old customers will also be lost.” Industry insiders expressed concern about this, ” Listing financing and accelerating expansion are not the best way to solve the current problem.”

Green Tea Restaurant is a typical “family business” with a simple shareholding structure.

The prospectus shows that the founders Wang Qinsong and Lu Changmei hold a total of about 65.8% of the shares of Green Tea Group through family trusts;Partners Gourmet, a fund of Hezhong Group, holds 28.2% of the shares;Nominee for RSUs with a 6.0% stake.

Who is the sole institutional investor, United Group?

As of the end of last year, Partners Group managed assets of more than 119 billion US dollars (about 750 billion yuan), and is one of the LPs of CDH, Hony, IDG and many other well-known PEs. At the same time, it also does direct investment, mainly involved in real estate, infrastructure and other fields. The style is extremely pragmatic and low-key, and the public exposure is not high.

intervention by management. After the transaction was completed, Mr. Tim Pihl Johannessen, who was then the Managing Director of the Industry Value Creation Department of Partners Group, and Mr. Liu Sheng, Senior Vice President of the Asia Private Equity Investment Department, served as directors of the company. After the listing, Liu Sheng, who has been promoted to the managing director of the group, and Tao Ye, a member of the management of the Asia Pacific Equity Investment Department, settled in Green Tea Catering and served as non-executive directors.

According to publicly available information, Green Tea is one of the few Chinese companies that choose to invest directly in Hezhong Group, and it is also the only catering company among them. At that time, green tea only had more than 70 stores in 19 cities across the country.

In the investment portfolio of Hezhong Group, there are not many catering companies. It has touched Vermaat, a high-end outsourcing catering service provider in the Netherlands, Wagamama, an Asian restaurant chain in the United Kingdom, Café Nero, a well-known British coffee chain, Pacific Bells, a fast-food franchise company in the United States, and Golden Gate, a well-known restaurant group in Vietnam. Each country is only 1-2 Family.

“It may be related to this round of catering listings.” Some investment bankers pointed out, “On the one hand, due to the impact of the 2020 epidemic, many catering companies have problems with capital turnover. Now they are encouraged to try. Many companies hope to open up listing channels to enhance their ability to resist risks. On the other hand, the poor performance in 20 years can be blamed on the epidemic, and there will generally be a rebound and recovery in 21 years, and the growth figures will be better, and the listing in 22 years is just right.”

From a market perspective, with the ebb of new consumption in the second half of 21, capital’s interest in catering has greatly diminished, and catering companies are also finding it more and more difficult to raise funds. “In the past, the valuation of a project may have exceeded the reasonable range by 30% to 50%, but after the second half of last year, it has clearly seen a decline. I think it is a good thing for investors and entrepreneurs, and everyone looks at the development of the track more objectively and rationally. Opportunities.” said Liu Zehui, founding partner of Xingtuo Capital.

In this regard, He Yanqing of East Asia Qianhai Securities said that the business environment of catering companies is changing rapidly, and choosing to list on Hong Kong stocks with relatively simple listing procedures can avoid the risks caused by the long approval process and strict approval requirements to a certain extent.

For Hezhong Group, after green tea is listed in Hong Kong stocks, it is expected to become one of the first companies that can exit through IPO after its overweight direct investment in the Asia-Pacific region. Four years of investment will create a listed catering company with an efficient rhythm.

However, some people in the industry believe that after the listing of green tea, Hezhong Group still has exit pressure.

In recent years, new consumer brands represented by Perfect Diary and Nai Xue’s Tea have performed poorly in the capital market after their IPOs, while established catering listed companies such as Haidilao and Xiabuxiabu have also fallen into weak performance and store closures. “Everyone is waiting to see the performance of this wave of new projects after the listing. I personally prefer to wait and see and be cautious.” The above-mentioned industry insider added.